I don't know why Sauber would be surprised at his statement. More than one court in more than one jurisdiction, at both first diet and appeal consistently said that Giedo had a valid contract and that Sauber were in breach of contract. It was examined in detail. So no, they do not have answers to the issues that he has very professionally and eloquently raised in his statement. Or at least not valid ones.

The decent thing to do would be to come out and apologise, admit that they screwed up, and make assurances that they will act more professionally in the future.

I have lost a lot of respect for the team (or at least the management of the team) through all of this, and it was a team I had always held in high esteem. Until they openly and honestly hold their hands up in relation to all of this mess which they and they alone created, I do not feel I can respect them further.
Favourite racing series: F1, Indycar, NASCAR, GP2, F3, Formula E, Trophee Andros, DTM, WTCC, BTCC, World Endurance... etc. etc.
Top

Maybe; it's just the sheer arrogance of going against all of the evidence that has gone against them time and time and time again; it really grates with me. How many times does the situation have to be independently professionally examined before they admit what is blindingly obvious - they made a boo boo!
Favourite racing series: F1, Indycar, NASCAR, GP2, F3, Formula E, Trophee Andros, DTM, WTCC, BTCC, World Endurance... etc. etc.
Top

Maybe; it's just the sheer arrogance of going against all of the evidence that has gone against them time and time and time again; it really grates with me. How many times does the situation have to be independently professionally examined before they admit what is blindingly obvious - they made a boo boo!

Maybe it's the combination of Indian pride with Swiss greed that holds them back...

Who would have thunked: Andrew is Guido van der Garde Anywhere but the back

Two teams finished behind Sauber in 2015 -- McLaren and Manor. Events in the last few months about both will have caught the Hinwil team's attention. Manor's acquisition of Mercedes engines for 2016 will have been a concern, while Honda will not expect another year so far off the pace as it targets improvements in its engine this year. Though Sauber enjoyed a strong start at last year's Australian Grand Prix it then dropped down the order, with its lack of resources meaning it struggled to keep up with those around it. The team will benefit from its Ferrari power unit but will also face competition closer to home in the form of Haas. The American debutants join the grid on the back of a highly-publicised technical partnership Ferrari which has included extensive use of the Maranello wind tunnel. Sauber will not want to be beaten by Haas, nor Toro Rosso, which will compete this season with a year-old Ferrari engine. Staying away from the back of the field is an unfortunate but realistic aim for the team this year.

Sauber is in financial distress and getting to China is in doubt. However there may be an Alfa Romeo backed by Ferrari solution emerging:

"Sauber’s financial woes are now well known and there are signs the team will struggle to make it to the forthcoming Chinese Grand Prix, but now it is emerging that a saviour in the form of Ferrari, specifically Alfa Romeo, is in the pipeline.

The Swiss team attracted headlines when February wage payments to its 300 staff were delayed. Furthermore, team co-owner Monisha Kaltenborn was not present in Bahrain, fueling suggestions that she stayed behind in Hinwil to address Sauber’s financial crisis.

Now it appears that Ferrari, their long time engine partners, may step in to save the embattled outfit – the fourth oldest team on the grid – from closing down.

Recently Sergio Marchionne, CEO of Fiat Chrysler and Ferrari Chairman, has championed the idea of the group’s Alfa-Romeo brand returning to Formula 1 as a pseudo-junior team to Ferrari, in the mould of Toro Rosso and Red Bull.

In January, Marchionne said, “It would be difficult for Alfa Romeo to return without the support of another team. An association with Formula One, that would be ideal.”

“It’s incredible how the Alfa marque remains in people’s hearts. For that very reason we are thinking about bringing it back, as our competitor, to racing, to Formula One. It’s important for Alfa to return,” insisted Marchionne at the time." 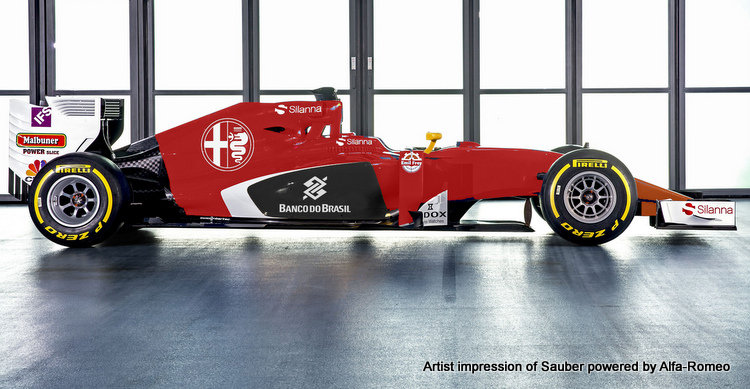 Sauber is unable to make payroll for the second month in a row.

By GMM Newswire
Apr 7, 2016 at 10:21a ET
Sauber has fallen behind once again with its full salary payments to its 300 staff in Switzerland.

The team’s boss Monisha Kaltenborn was not in Bahrain last weekend, amid reported talks with potential buyers and rumors cashflow problems could shortly end the struggling Hinwil based team's 23-year F1 adventure.

Now, a month after similar reports about the February payments to staff, Neue Zurcher Zeitung newspaper claims Sauber has once again fallen behind for March.

Team spokesman Robert Hopoltseder confirmed: "The worries of the last few weeks are not off the table. We currently live from hand-to-mouth."
The truth is incontrovertible. Malice may attack it, ignorance may deride it, but in the end, there it is. - Winston Churchill

Would love to see Alpha-Romeo take over Sauber and make a return to F1.
Top

Sauber to race in China - Ericsson $ to the rescue

The Sauber Formula 1 team has secured a sponsorship advance from its Swedish backers to pay March staff salaries and is certain it will compete in China, Autosport has learned.

It is believed the money will be transferred on Friday, with all staff expected to have salaries in their accounts by Monday at the very latest.

The Swiss team did not pay its staff on time in February because of cashflow problems and the situation repeated itself in March.

But Autosport understands Marcus Ericsson's Swedish sponsors have stepped in with an early payment to ensure staff are paid.

Kaltenborn was not in Bahrain as she held talks with several parties, but as yet no new deals have been agreed.

It has yet to be decided whether she will travel to the Chinese Grand Prix as it may be that her time is better spent at the team's basis in Hinwil to continue negotiations.

Unless further sponsorship is found in the next few weeks, the team will likely have to rely on its backers from Sweden and also from Felipe Nasr's supporters from Brazil, to pay salaries for April.
The truth is incontrovertible. Malice may attack it, ignorance may deride it, but in the end, there it is. - Winston Churchill

Marchionne, the Ferrari and Fiat Chrysler president, has been saying repeatedly in the past weeks and months that Alfa Romeo could revive its historic place on the F1 grid.

“This (F1) is the maximum technological expression of the automotive world,” he said on a rare paddock visit in Shanghai, “and so considering the objectives of Alfa Romeo, I think the option should be considered.

“The Alfa myth was born with racing, and somehow we have to get back there,” Marchionne added.

The other pressing question is precisely how it will happen, amid speculation Alfa Romeo could enter F1 as another Haas-like satellite outfit.

But there have also been rumours Alfa Romeo could simply take over the ailing Sauber outfit, whose facilities in Hinwil, Switzerland, are state-of-the-art in the wake of BMW’s former F1 project.

Asked about the Sauber buyout rumours, Marchionne is quoted by Italy’s Autosprint as answering simply: “If someone will assume all the debts…”
The truth is incontrovertible. Malice may attack it, ignorance may deride it, but in the end, there it is. - Winston Churchill

By: Lawrence Barretto, Autosport F1 Reporter
4 hours ago
Sauber is closing on a deal with Honda to use the Japanese manufacturer’s Formula 1 engines next season, Motorsport.com has learned.

The Swiss team has run Ferrari power since 2010 but Sauber has been working on finding a new partner.

Talks with Honda have been ongoing for some time but accelerated in March, and the finishing touches are now being put to what will be a long-term arrangement.

Sauber is bracing itself for a challenging season with year-old Ferrari engines, but a switch to Honda next term will see the team return to using the latest spec.

The deal is the latest step in Sauber's rebuilding plan, after new investors came onboard last July to save the team and solidify its future in F1.

When Honda returned to F1 in 2015 with McLaren, an agreement was made whereby both parties had to approve if Honda took on a second team.

The regulations subsequently changed, with the FIA now able to compel the manufacturer with the fewest customers to supply a team that needs an engine.

Honda was not keen, particularly given its struggles with performance and reliability, but would do so if asked because of its duty to F1.

When the situation on and off track improved last year, Honda turned its attention to the possibility of taking on a second team.

Last summer, it expanded its Milton Keynes base to provide the space to accommodate another supply and talks with interested parties beginning soon after.

Sauber emerged as the frontrunner, particularly given it was growing increasingly frustrated with supplier Ferrari regarding performance and unreliability.

An announcement is expected in the coming days with engine manufacturers required to notify the FIA of who it intends to supply for 2018 by May 6.

McLaren boss Eric Boullier admitted last week that, given Honda's problems this year, the Japanese manufacturer could benefit from having more teams running its engines.

"I think in this specific case it's better," he said of the lack of testing miles. "I think more teams is better and more engine running is better. But there is a price to pay for that, which is deviating more resources into building more engines.

"Whatever happens, we are partners, so at some stage there will be a second team supply question, and I think we'll have to support this. But we want to make sure it's not detrimental to our partnership."

https://www.motorsport.com/f1/news/saub ... 18-897554/
The truth is incontrovertible. Malice may attack it, ignorance may deride it, but in the end, there it is. - Winston Churchill

I have to laugh because Sauber claims they are not happy with the performance and reliability of a year old Ferrari engine AND they are moving to an engine yet to finish a race this season?
myownalias • The Englishman in Kansas • Twitter: @myownalias
Top

Maybe they saw/know something we don't?