I talked with a friend in broadcast, she said that once the 5 sec penalty was announced viewership started to slide dramatically. I hope that the Team Merc aka F1A wins every race, viewership totally collapses, panic sets in at Liberty Media as they see the value of their investment collapse, Ferrari, Renault, Williams prepare to lv and concentrate on FE. Maybe just maybe pure racing will be on the tarmac again and the sport will have to earn the respect of the fans.

My brothers and I, five of us, were going to attend the GP in Montreal this year but we decided to call it off due to the Merc dominance. At $2000 each it seemed too much to see a predetermined result.

This is a safety rule. I work in a safety-intensive industry - I flew airliners for a good part of my life. I fly my desk now and work with them there. I also road race motorcycles. I'm overjoyed with safety rules, as not all of them are. This one is. I wouldn't want the other company's airliner cutting me off on a taxiway because he was taxiing too fast or ran off the track or forced to clamp on my front brakes because someone cut the racing line where I was. Either case isn't fair for me at least and at worst either wind up in the hospital or morgue. Vettel doesn't have time for rules. I've watched him for years tout his arrogant attitude to anyone, including when he is cut off of the racing line. Rules apply equally to both parties. Thank God we have them. How many seconds did it actually cost Hamilton, 2 maybe? He won by less than a second and a half. With a 2 second penalty, he still would have won. When this happened matters, too. Next to the last lap sure doesn't have as much time to make up your loss. If Vettel was as fast as he and some others think, he should have been able to make this up, if Hamilton got the position handed to him. I don't think Vettel is nearly that fast, though. This was the first decent showing Ferrari has had this year. Keep your eye on LeClerk - He's fast. If he had the experience Vettel has, Hamilton would have a lot more competition this year. Safety rules... you bet! Bring them on! Vettel should leave his arrogant attitude outside the track... along with his place marker.
Top

^Should we agree with your opinion or should we agree with the opinions of Daniel Ricciardo, Nigel Mansell, Jenson Button, Martin Brundel, Karun Chandhok, Mario Andretti, etc etc, all of whom are F1 drivers and all in agreement on the lack of a safety issue and that the penalty was a blatant mistake?

Not really, it should be this way, but unfortunately, the FIA stewards are super inconsistent. Yes, Vettel has made some dubious moves over the years, but in this case, I think it was a genuine mistake and he was struggling to regain control of his car. There has to be a balance between safety and racing, too much health and safety ruins racing, this is F1, not a commercial airline.
myownalias • The Englishman in Kansas • Twitter: @myownalias
Top

This just about sums it up: 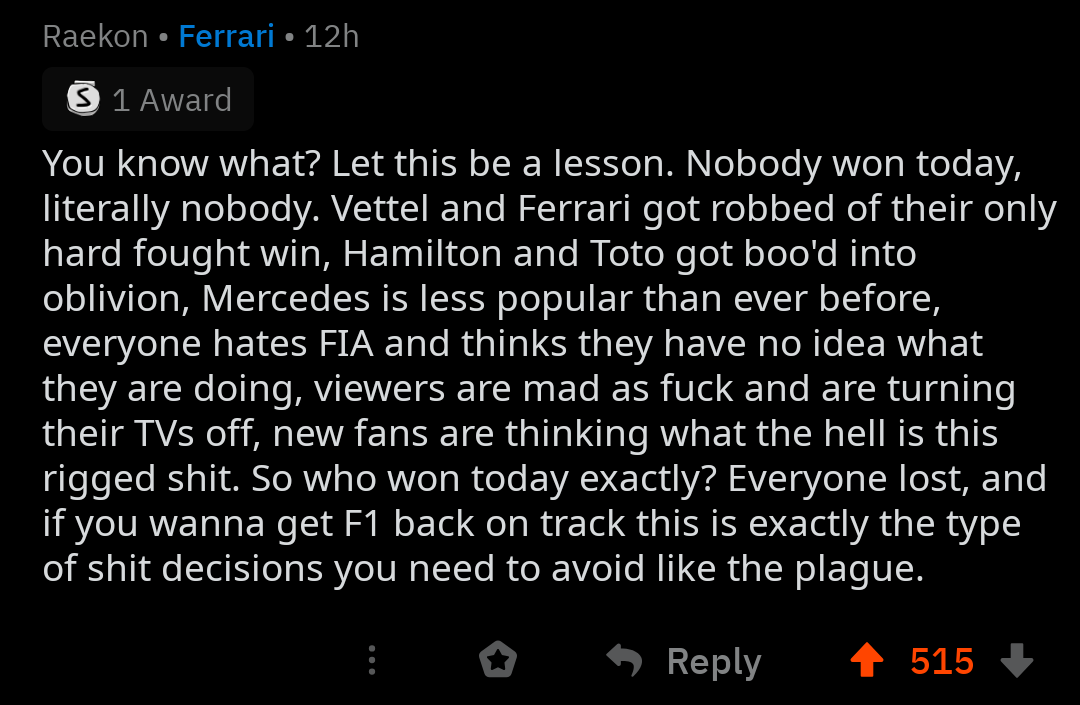 I, for one, am going to disagree with the predominant opinion that this was a racing accident and as such should not have been penalized.

So yeah, it is a boring season for sure, but it's not Mercedes fault that they did everything perfect. Formula 1 was always about power, money, perfection and luck. This is exactly what we got this year. The most powerful team, with a lot of cash, being perfect and lucky at the same time.
Top

What was the unsafe part exactly?

When the F1A send out the bat signal, Toto arrives.
Top