Questions and answers about going to a race weekend
378 posts

With the arrival yesterday of "the mother of all cranes" as one observer put it, Main Grandstand construction begins in earnest:

COTA brass went to Melbourne & will go to other GPs in an effort to gather the best ideas to handle crowds on race day. Anyone besides me think it's a little late for something like this? Shouldn't this have been going on last season?

Austin Police will implement same strategy as that used for South by Southwest:

tim wood wrote:COTA brass went to Melbourne & will go to other GPs in an effort to gather the best ideas to handle crowds on race day. Anyone besides me think it's a little late for something like this? Shouldn't this have been going on last season?

I totally agree. Surely crowd control should be thought about in the initial facility design. Not 6 months before the race is on?

Here are some new photos I shot today at COTA:

The Austin Children’s Shelter is pleased to announce the “Ultimate” Formula One™ Grand Prix Package available through live auction this Friday, March 23rd at the Austin Fashion for Compassion Event. This exclusive VIP access package includes:

Package Details
The driver "meet and greet" will include a rare private meeting and photo opportunity with Michael Schumacher and Mark Webber, as well as a quick tour of their race cars. Michael Schumacher (Germany), driver for the Mercedes/AMG F1 team, is a seven-time Formula One World Champion, and is widely regarded as one of the greatest F1 drivers of all time. He holds many of the Formula's driver records including the most championships, race victories, fastest laps, pole positions, points scored and most races won in a single season – 13 in 2004. According to the official Formula One website, he is "statistically the greatest driver the sport has ever seen.” Mark Webber (Australia), driver for the Red Bull F1 team, is a reigning F1 championship team driver, 7-time Formula One race winner (including the 2010 Monaco Grand Prix), and a 2012 World Championship favorite.

The luxury hotel is ideally located so guests may enjoy the best of Montréal, and will also host top Formula One personnel. The surrounding neighborhood of Old Montreal abounds with magnificent architecture, art galleries, cafés, boutiques and some of the city’s finest restaurants. The Old Port, with its IMAX theatre and river cruises, is steps away from the Palais des Congrès convention center, Multimedia City and downtown Montreal.

The Formula One Grand Prix Du Canada is the longest running Grand Prix held outside of Europe, running over 30 editions in Montréal. It is one of the most sought-after races to attend on the annual calendar, and draws some of the largest crowds in the circuit. Scheduled for June 8-10, 2012 in Montréal, QC, Canada, this package will provide all the romance of Formula One in an unforgettable way. This package represents a once in a lifetime opportunity for any true Formula One racing fan, as well as the opportunity to help Austin-are children.

New construction photos from the Statesman. I was wrong about there being new cuts made for Turn 12. It looks in the aerial like the stadium section is still uncut.

This thread's title is misleading now!

Re: Not so much trouble brewing for Austin's F1 circuit?

I hope it all ends well for COTA because it is shaping up to be en excellent circuit...

"I don't make mistakes. I make prophecies which immediately turn out to be wrong..."
Top

BTW guys, a Speed TV F1 forum poster posted this aerial, shot yesterday. It's a bit closer & more detailed than the one posted by COTA. He took it on a flight out from ABIA in Austin. 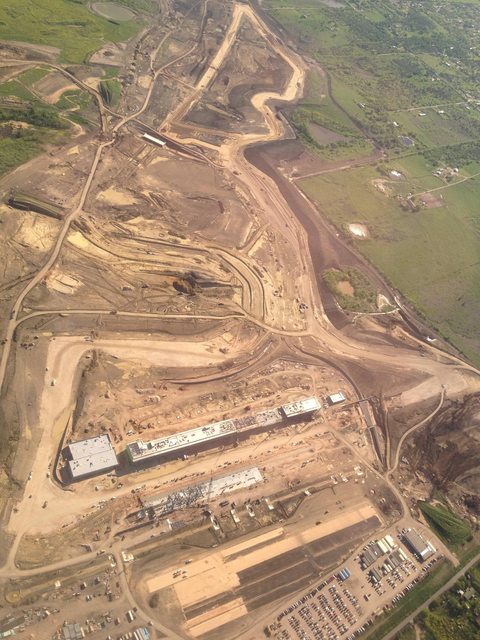 OK, so some of the boys over at F1Technical.net were trying to make the case that COTA construction is on par with or even ahead of where India was last year at a similar point.

I decided to look into that idea and see for myself. The results were interesting to say the least. I came to this "similar point" by looking at photos and calculating how many days each project had remaining until FP1.

The COTA grandstand is well behind Buddh's grandstand at a similar point in the construction. With 242 days remaining until FP1, the structure of Buddh's much larger, concrete, 29000-seat GS was all but done. At 235 days out, Austin's 9000-seat GS (reduced in size due to time and cost concerns) has really just gotten underway.

Will COTA get these buildings and the track done in time to race? They probably will. They should. Outside the circuit itself, the plan has been gutted to the point of emasculation. Is Austin behind India at a comparable point in time? Certainly.

Buddh's and Austin's pit buildings, aside from the lack of walls in Austin's, seem somewhat close in development at this point.

Below is a Google Earth shot of the Buddh Circuit from January 16, 2011. At this point, Buddh's Media Center, Medical Center, and Team Buildings are clearly visible So are the several of the 13 Restroom structures and/or their foundations, the Entrance Gate, and the Administration Buildings. You can also clearly see the outline of the cut of the entire circuit, the runoff areas, and circuit's clearly defined perimeter access road.

The COTA track cut is not yet complete and the perimeter road cut appears incomplete. Runoffs are visible (but only 2 or 3 are clearly visible) from T18 to about T7. There are no buildings visible other than the Pit Building, Media Center, Medical Center, and the foundation & limited construction on the Main GS. There apparently are no Team Buildings, Restrooms, Ticket Office, or Admin Building any longer in the COTA plans.