Figured I'd share these, as expected they're TG funny and pretty accurate in their assessment so far.

TOP GEARRemember Australia and Malaysia and how Jules Bianchi looked to be the story of the season with a 15th and then a 13th place for a Marussia team that looked capable not only of leaving Caterham behind in Division Three, but threatening to bother Williams in D2? Well, if there’s a better illustration of hope extinguished than Marussia’s last race of the first half of the season, ten days ago in Hungary, I’d like to know; qualified last, finished last (of the finishers) three laps behind Lewis Hamilton.

Monaco aside, Marussia’s cars have only once finished on the lead lap once this season and that was at Silverstone where the racing was anything but regular, which begs the question: have they really shown any progress at all this year?

F1 grids would look pretty thin without Caterham and Marussia (we’ve already lost HRT from F1 in the last 12 months), but clearly the Bright New Dawn they were supposed to represent has just not happened. There has been a shift of power at the other end of the grid away from Ferrari and McLaren to Red Bull, Mercedes (and its previous incarnation Brawn) and Lotus, but it’s still very apparent that pace costs and Marussia – like Caterham – can’t afford it.

Marussia, as Virgin, were supposed to be the poster boys for the new age of F1, its cars designed by whirring great computers shifting terabits of information around and spitting out the blueprints for a fast car. Instead the whole CFD project proved an unintentionally amusing reminder that AI is still largely a pipedream and needs someone smart to lovingly key the right data in; the first Virgin/Marussia car’s fuel tank wasn’t big enough to get it to the end of the race. The team’s first two years were largely lost to the CFD project then.

The team will have Ferrari engines next year, but will also have to develop its turbo car without Pat Symonds, the once-exiled former Benetton director, who did so much to put the team back on an even keel once HAL and his mates had been dropped. Symonds is off to Williams where, remarkably, he has a similar job to do. Maybe Marussia can draw some strength from the fact the once mighty Williams is now barely any faster.

Not that it will help the drivers much. Jules Bianchi missed out on a Force India drive when the team opted to go back to Sutil. Given the consistently good form of Force India and those terrific drives in Oz and Malaysia, who knows what we might be saying about Bianchi now. He’s still on Ferrari’s ‘watch list’ and undoubtedly helped secure next year’s engine deal, but right now he no longer looks like the man to replace Massa.

Max Chilton, the other Brit, is there because his father is paying for it. If his company can pay to get its name on the shirts of MUFC then getting young Max into F1 was never going to be a problem. And nor should it be; who wouldn’t grab that chance? And let’s face it, it can’t be easy for Max, admitting to all who can be bothered to listen that his best chance to improve his race performance will come from learning to lose less time reacting to blue flags.

Lol this is the only team thread with zero replies, so I'll donate one.
Breaking News: Lewis Hamilton has officially overtaken The Fonz in race wins. With 88 races less. Lol (Without a specially built blown diffuser, illegal front wing, preferential treatment)
Top

We should go back and collate the HRT threads into one team thread, I bet they outnumber the Marussia/Virgin posts.

My contribution... sometimes during a race in the distance, with the fata morgana effects of the heat I think the Marussia is a Ferrari.

I still think the Marussias are pretty cool looking cars: 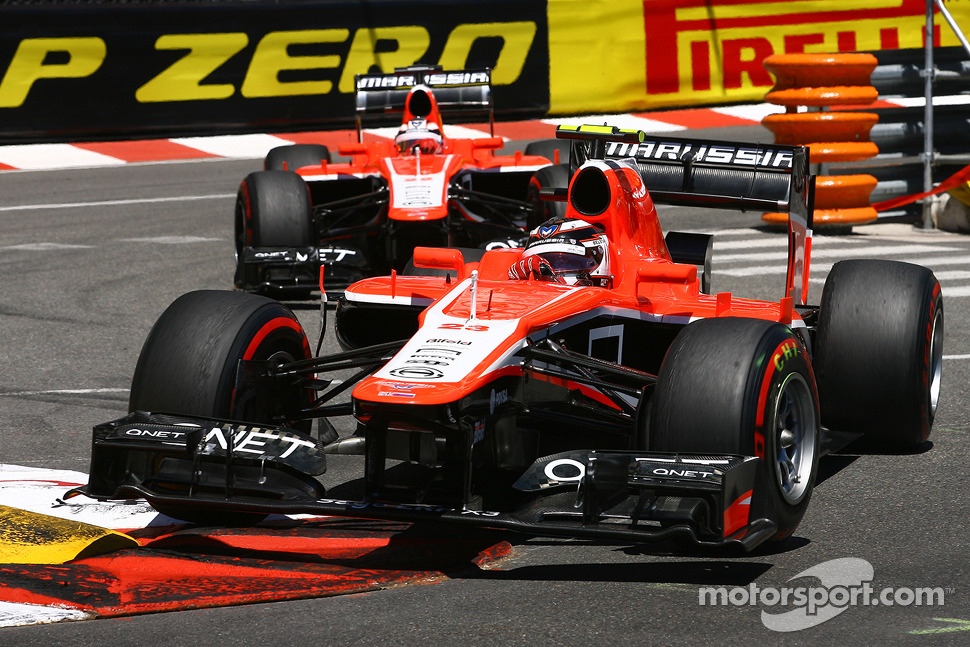 "Inherently, we at Williams just want to win races. We love going motor racing, we have a real passion for it and that never diminishes." Claire Williams
Top

1Lemon wrote:I think the red makes them look like they are made of plastic.

They are. Thats all they can afford.

When you think about it they have about 1/10 of the top teams money. They are not that fst off the pace

1Lemon wrote:I think the red makes them look like they are made of plastic.

It may seem strange, but I quite like that look

Marussia are having problems with their car/engine integration and will miss the first few days of Jerez, but have confirmed they are trying to drive by at least Thursday. See Lotus was right, just not in the way they expected.
Mark my words, Bottas will be world champion by 2020 - Me 24/11/14

"Inherently, we at Williams just want to win races. We love going motor racing, we have a real passion for it and that never diminishes." Claire Williams
Top

It was a given that this would happen, sooner or later!!

A computer virus that hit on the first day of the Bahrain test put Marussia on the back foot for the rest of its running at the Sakhir circuit.

The ex-Virgin squad completed only 29 laps during the four-day test, fewer than any other team, with the virus that the team spent Wednesday fixing effectively wiping out the day.

"It started off with the first disaster, which was a computer Trojan-type virus in the racks, which cost us the best part of the day," team principal John Booth told AUTOSPORT.

"So that set the tone for the week...

Can't they afford a 1y, 3 user Norton Antivirus subscription or something.

Hammer278 wrote:Can't they afford a 1y, 3 user Norton Antivirus subscription or something.

No if they buy that, they'd then have to get an iCar, iPit, iTunes for their pit-com radio so they can all run 'compatibly' so no thanks.