I guess that I had gotten used to him in Red Bull blue, seeing him in red still looks wrong to me at the moment!

So should I expect Vettel to start deliberately clattering into rival drivers to win championships?

Yo sure about this?

Yo sure about this?

Red is definitely better on Richard than orange: 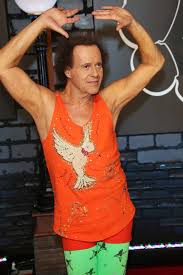 A yawning 34 seconds might have separated third-placed Sebastian Vettel from Australian Grand Prix winner Lewis Hamilton on Sunday but the podium spot felt like a victory for the four-times world champion on his Ferrari debut.

Jumping ship to a shaken-up Ferrari was a leap of faith for Vettel after the Maranello team laboured to fourth in the championship, their first winless season in over 20 years.

Though buoyed by a positive winter testing, Vettel was apprehensive about what to expect on the first race weekend but was relieved when his car behaved during qualifying at Albert Park on Saturday.

Starting fourth on the grid, Vettel survived a chaotic start that saw him nearly hit team mate Kimi Raikkonen and after holding off Williams driver Felipe Massa for a well-earned podium spot, spoke of truly 'living the dream'.

"It's really an honour to sit in the red car," the 27-year-old told reporters. "Certainly when the chequered flag came out it was a great feeling.

"Of course, it's not a victory, but for us it feels like a victory. It's a great relief after a horrible season last year."

Vettel was under no illusion about Ferrari's distance from reigning champions Mercedes but said it would not be "impossible" to catch the Silver Arrows.

"Well, you have to be realistic. For sure, as I said, they have a great package at the moment," he said. "It will be difficult to beat. Thirty four seconds down the road is a lot for everyone else."

Fifth off the grid, the Finn lost ground when hit from behind during the chaotic early exchanges and again on the side at a traffic jam at the second corner.

He would then suffer two botched tyre changes, the second one forcing him to retire after his rear left wheel was not attached properly.

"Kimi was pretty decent as well in pace terms although we are very fed up with what happened in the pitstop," Ferrari technical director James Allison said. "But the race was OK.

"It's the first race and we've just got a podium... On any level, that's got to make you happy."

Sebastian Vettel has turned down Nico Rosberg's invitation to attend his engineering briefing in Malaysia. In Australia, the rival Germans exchanged verbal blows in the press conference when Rosberg suggested he would be happy if Vettel's Ferrari caught up. "Engineers room, debrief -- I'll be there," Vettel grinned. "Friday, Malaysia, ok," said Rosberg.

Rosberg duly arranged with his Mercedes bosses Niki Lauda and Toto Wolff to allow Vettel to attend the briefing, announcing the news in a major German newspaper and on his Facebook account. And in the team's official pre-race preview, Rosberg was quoted as saying: "I'm particularly looking forward to welcoming our special guest Mr Vettel to the Friday engineering meeting."

On the eve of the meeting, however, Vettel told the media he sniffs a PR stunt. "I got the growing impression that the story was degenerating into a PR stunt," he was quoted at Sepang by Auto Motor und Sport. "It was all a bit staged for my taste. I think I will better use my time on Friday to go to our briefings at Ferrari," added Vettel, insisting the Italian team is "intelligent" enough without Mercedes' help.

Rosberg was disappointed to hear it, dismissing the theory that it was just a stunt. "Sebastian really could have come," he said. "Maybe there would have been two or three details that we would not have put on the table, but he could have listened to what I feel from the car and how it behaved in practice."

These are fighting words!!

Sebastian Vettel had his usual Thursday media meeting in the Sepang paddock and his first job was to explain to the press that the suggestion that he should attend a Mercedes team briefing today, was nothing more than a joke. “Do you imagine if I went there, they would really open up?” the Ferrari man asked his audience. “I was joking, if you have an advantage you don’t want to give it out. Of course you can learn from other people, but we have a lot of intelligence in our team and I think from last year to this year we seem to have made a good step. Now it’s up to us to confirm that in the next couple of races and make sure we progress. With this year’s car, from the first day I was happy with the balance. I like the flow the car has.”

An encouraging start in Melbourne leaves the German keen for more: “We must work to establish ourselves in the position we were in in Australia, ideally a little bit closer to Mercedes and a little bit further ahead of Williams. It will be very close between us and Williams and also Red Bull: it’s only a question of time as to when they will come back.”
In the heat of Sepang, Sebastian believes the Scuderia should not automatically look to follow Mercedes. “We will tackle the weekend as usual, trying to get the car in the right window to get into a rhythm. In Malaysia, anything can happen, so our target should not be just to establish our position. We must attack and try and close the gap to Mercedes and with the conditions you can get here, a win is always possible.

Asked about the general state of Formula 1 as the sport goes into a second season under new rules, the Scuderia driver was generally upbeat. “In terms of excitement there are some things we miss and speaking to the fans the noise is one of those. Then, as a driver, you always want to go quicker. But the things you enjoy are always the same; driving one of the quickest cars in the world and competing against the best drivers.”

Nope... It's where it needs to be!
But, thanks for the suggestion!!

Sebastian Vettel's victory in the Malaysian Grand Prix came out of the blue, but it was a very welcome surprise.

No-one would have predicted it, apart perhaps from Ferrari.

Regardless of how strong Ferrari looked on their long runs during Friday practice, a victory just didn't seem possible with Lewis Hamilton's Mercedes on pole.

But the race unfolded exactly as Ferrari would have hoped.

The key thing was the strategic decision not to pit under the safety car. That transformed the race from something Ferrari were chasing to one they were controlling.

There are some great brand names in F1 but I have a sense that it means more to more people when Ferrari win, especially after a difficult time, than another brand or even a star driver.

I don't personally bow down to Maranello, but so many people do. It has to be the most recognised car brand in the world, from heads of state to people in villages in the middle of Africa.

Ferrari evokes passion, and Vettel has handled the whole transition from last year to this very well.

In his final year at Red Bull, he looked unhappy, even a bit spoiled, giving the impression that he was only happy when he was at the front.

When he was winning all those races for Red Bull, a lot of people said it was the car, but whatever your position on that, the bottom line was the style and manner in which he was doing it. He was a class act, and Malaysia was another classic Vettel performance...