LewEngBridewell wrote:Main polls have now been created, I hope you all enjoy voting!

Thanks for the suggestions, I'll look into them. Lots of forum-members awards being suggested!

You're right maybe you should leave it out... It would be awkward giving yourself an award Lew.
"I don't want to be part of a forum where everyone has differing opinions." Boom...
Top

Yes, yes, yes, I know what I'm doing. Where the fook is the shortcut this year??? Alright, I'll turn around then - grumble, grumble...

You should see the member of the year award in the Mods room.

Jabberwocky wrote:You should see the member of the year award in the Mods room.

Rising number one of Formula 1, Juan - Juan, one wonders should Juan only win one Formula 1 one year, would Juan have won that one in round one, Juan??
Top

Membership has its privileges.

Jabberwocky wrote:You should see the member of the year award in the Mods room.

It tickled me anyway

The cat's out the bag now. Spill the beans.

andrew wrote:The cat's out the bag now. Spill the beans.

I'm sure you'll be right up at the top. BTW, is that chocolate on your nose? What an odd place to keep it.

andrew wrote:I'm sure you'll be right up at the top. BTW, is that chocolate on your nose? What an odd place to keep it.

Right forum members, the results are in. Time to present the Forumula1.com Awards for 2012!

With 40% of the overall vote, the young (and very attractive ^^^) Frenchman takes the Rookie of the Year honours. When Pic signed for the back-of-the-grid Marussia team, the task lying ahead of him was momentous - to impress in a car which gives you very little opportunity to stand out. In years previously, young hopefuls such as Lucas Di Grassi and Jerome D'Ambrosio failed to make an impact, and duly fell from the radar. With the highly regarded Timo Glock continuing in the other car, Pic's job was none too easy.

But impress he did, and more importantly, he impressed all the right people. The Caterham team welcome him to their clan for 2013, and last month, they said the following; "Throughout the 2012 season we have been monitoring the progress that Charles has made, challenging us on several occasions in qualifying, and it is clear that he is a special talent. As the year has progressed he has performed extremely well against a very experienced team-mate and we are looking forward to seeing him develop further within the environment we will provide in 2013 and beyond."

Charles Pic's finest performance came as the curtain dropped on the season, at Interlagos. He dragged his Marussia to a very respectable 12th place, finishing ahead of the likes of Ricciardo, Rosberg and Kovalainen.

Selected forum member's comment: I think everyone underestimated Pic but he did quite well i thought, and fully deserves to stay in F1 for another season. And save for Raikkonen, has the most proven team mate of any driver on that list, and he stacked up pretty well against Glock. (Scotty)

With a highly respectable 52% of the community vote, Fernando Alonso is Forumula1.com's Racing Driver of the year 2012. Lewis Hamilton came 2nd (22%) and Sebastian Vettel 3rd (17%).

Once again, the double world champion was given a car which was quite simply not good enough to maintain what would normally be a staunch and consistent fight for the WDC. The Ferrari was woefully off the pace in testing, and all fears were confirmed in Melbourne. So, to bring the car home to win in Sepang was a shock to everybody, even Ferrari themselves.

This would prove to be a major story of the season. While Felipe Massa, for the most part, had a dreadful campaign, Fernando Alonso would continue to pick up valuable points, often coming on strong in race set-up. Two more wins followed, but a better car would've been required to maintain a more consistent title challenge. Highlighting the mastery of Alonso's work this year was the fact that he would no doubt have been champion had he not been caught up in the first lap carnage at La Source, and also been involved the first corner mayhem in Suzuka.

Alonso will be hoping that Ferrari's fortunes begin to change in the next couple of years, especially after signing an incredibly long contract with the Scuderia. Until now, it's been a case of the Spaniard making the most of a less than ideal situation. Things must change, or he won't be happy.

Selected forum member's comment: It has to be Fernando Alonso; to finish only three points behind Vettel after 20 races in a car which was nowhere near the fastest is incredibly impressive! (myownalias)
Last edited by LewEngBridewell on 28 Dec 12, 16:34, edited 3 times in total.

Prior to the start of the season, F1 fans largely predicted another season of Red Bull dominance. But following Melbourne, Red Bull seemed to have lost something. McLaren dominated in Albert Park and for much of the season, looked to have the fastest car. However, what RBR lacked early on in speed, they made up for in consistency. This paid dividends in the second half of the season, when the Milton Keynes squad finally managed to get up to front-running pace, and McLaren started to flounder.

The team has now won three constructors' titles on the trot, and there are no signs that this will abate. Taking on legends like Ferrari and McLaren, and soundly beating them year in, year out, has made them a huge force to be reckoned with.

Selected forum member's comment: Has to be Red Bull for getting the treble. (andrew)

The Interlagos circuit has a reputation for cooking up a cracking Grand Prix, and with 50% of the vote, the Brazilian Grand Prix comfortably won Forumula1.com's best race of the year. The return of the USA GP in Texas was 2nd (22%) and Abu Dhabi came 3rd (11%).

With the title battle still wide open, there was lots to look forward to, but it seemed to have ended prematurely on the very first lap! Things got out of hand going into Turn 4, and we saw a drastic coming together between Bruno Senna and title contender Sebastian Vettel. Amazingly, after being spun around and clattered into, Seb was able to continue, while Senna and Sergio Perez were forced to retire.

Vettel's comeback was great to watch, but there was plenty of action elsewhere. The McLarens of Lewis Hamilton and Jenson Button traded the lead as the conditions fluctuated, but Hamilton's likely victory was wiped out when Nico Hulkenberg lost control of his Force India when trying to pass. This left the way clear for Jenson Button to win.

The safety car let the pack trickle across the line after Di Resta crashed heavily at the fearsome Sudiba Dos Boxes (where Kimi Raikkonen comically got lost trying to find his way back on-track after mistaking a dead-end for a slip road). Vettel won the title after clawing his way back into the points. As good a title-decider as any, I would say!

Selected forum member's comment: The WDC championship on the line, the on/off rain, all the WCC battles up and down the grid, Hulkenberg was leading for a while and actually keeping pace, last Schumacher race, last race for Hamilton at McLaren... I could go on. It was insane. (acosmichippo)

With 38% of the vote, the Korean Grand Prix takes the mantle of the most boring race of the year. There were smatterings of sporadic action, such as Jenson Button and Nico Rosberg getting clumsily taken out by Kamui Kobayashi on lap 1, and a terrific overtake of multiple cars mid-race by Nico Hulkenberg in his Force India. However, the race at the front was relatively straight forward. Mark Webber typically made a poor start, handed the lead to Sebastian Vettel, and that was that.

Lewis Hamilton suffered considerable misfortune throughout the course of the day, starting with an anti-roll bar failure, and then losing lots of time when a large piece of astro-turf lodged onto the floor of the car in the dying stages. This completed a terrible day for McLaren, and the team went away with 1 point.

Korea is one of those (thankfully few) races where the grandstands look horrendously empty throughout the weekend.

Kimi Raikkonen made a popular and successful return to F1 in 2012, and his radio antics in Abu Dhabi take a 30% majority to win F1's moment of the year award.

Never one to flower up his persona for the media, the Finn's reaction to being told how to manage his race was a humorous addition to what was a classic Grand Prix. Raikkonen's faux pas in Brazil, with the sliproad, was also a popular option on the poll, and took 2nd place with 20% of the overall vote. 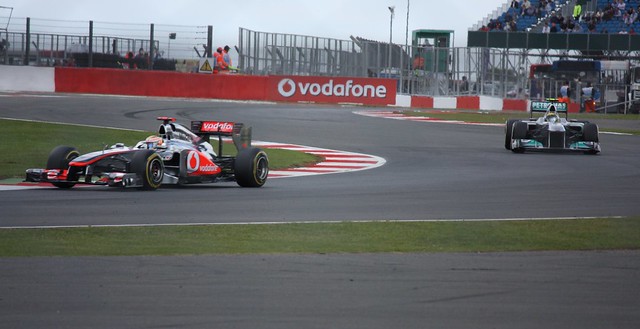 This was a draw. Both McLaren and Mercedes took 33% of the overall vote to become joint winners of the fail of the year award. It proved to be a topic of much (heated) debate, but it is fair to say that both teams were disappointments this season.

McLaren's fortunes were somewhat tragic to watch, especially given the way the Woking team started the season, with a dominating victory at the opening race in Melbourne. Echoing back to 2005 and 2007, McLaren went on to have a frustrating season, despite often having the fastest car. It was certainly fragile, with both Lewis Hamilton and Jenson Button having to park the car and thus surrender valuable big hauls of points. Numerous incidents, both on-track and in the pitlane with the pit-crew, were also prevalent, and there is no doubting that the team let a good chance of both championships slip through their fingers. To add insult to injury, McLaren slipped to 3rd overall, behind Ferrari, as their season began to unravel.

Mercedes completed a third season of disappointment. There were highlights, such as the team's first victory since returning to the sport as a fully fledged manufacturer team, and also Michael Schumacher's return to the podium in Valencia, but there is no hiding that the team is not where they want to be. Putting China aside, Mercedes were of no threat to the top four teams, and were even coming under pressure from Sauber as the season waned. The biggest eye opener was the fact that the team went through a full five races without scoring a single point in the second half of the season. This was only ended at the final race in Brazil, where a meagre 6 points assured Mercedes a very distant 5th place in the WCC.

With Lewis Hamilton on board for 2013, Mercedes will be looking to finally move up a rung, and they have a driver more than capable of helping them do that.

Selected forum member's comment: Mercedes was going backwards in the races right from the get-go; China was kind of a fluke. Their performance did drop off dramatically however, specially if you look at their early qualifying pace. McLaren do take the cake, though. Starting with the best car and keeping that status for a big part of the season, and (aside from Button's mid-season slump) with drivers performing at a good/great level, they managed to lose to both Red Bull AND Ferrari in the WDC and WCC, which considering how terrible Ferrari started the season, it's an incredible achievement. (Hansy)