Basically, by Hamilton's standards, some parts of the season were shocking. As for Massa, well he's just exceptionally crap anyway but that's what Fernando and Ferrari seem to have accepted and wish to carry on with.

F1 Most exciting race of the Year 2011 - CANADIAN GRAND PRIX

With 64% of the vote, the Canadian Grand Prix is Forumula1's most exciting race of the 2011 season. The Montreal circuit very rarely disappoints, and this season we were treated to another classic.

Things started relatively slowly with regards to actual racing however. A wet track resulted in a safety car start... the first four of what seemed an enormous amount of laps spent behind it. When racing got under way, Lewis Hamilton and Mark Webber immediately came together at Turn 1, and fell down the order. In his recovery, Hamilton collided with his very own team-mate Jenson Button on the start-finish straight after the latter seemed unaware of the former's presence. Hamilton ended up in the wall, with a broken suspension and a DNF. This was not what Hamilton needed after a troubled run in Monaco. Soon after, the race was stopped for two whole hours while rain drenched the circuit. Forumula1.com recorded the most ever users online at one time (200) during this period.

Pitting for the resulting damage was the first of many visits to the pit for Button, and after the race resumed, he fought his way back up the order, and despite damage sustained from a coming-together with Fernando Alonso, he clawed his way towards the front again. On the final lap, he piled the pressure on race leader Sebastian Vettel, and following a mistake from the Red Bull driver, moved into the lead to claim a thrilling victory. Mark Webber demoted a strong Michael Schumacher to fourth to take the last spot on the podium.

Second place in the poll was the Chinese Grand Prix, taking 14% of the vote.

F1 Most boring race of the Year 2011 - EUROPEAN GRAND PRIX 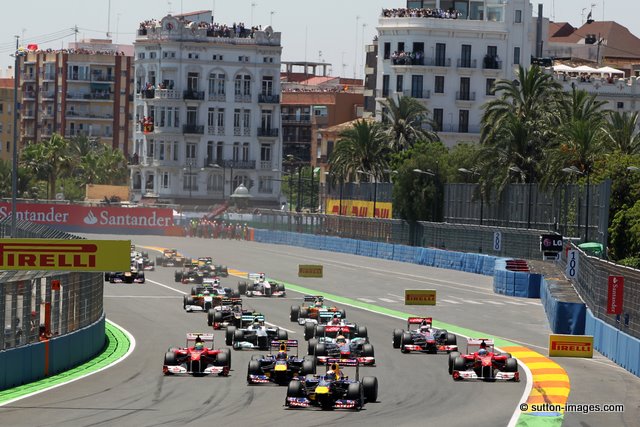 This was a closely contested poll, with Valencia claiming 35% of the vote. The European Grand Prix just ousted the inaugural Indian Grand Prix, which took 29% of the overall vote.

Valencia has gained a reputation for producing dull races (Mark Webber's enormous accident in the 2010 race remains one of the few memorable moments here) and 2011 was no different. Sebastian Vettel led strongly from pole, while Felipe Massa advanced up to 3rd from 5th... but immediately lost a position to his team-mate. Both McLarens made slow starts but Jenson Button made an early pass on Nico Rosberg to take himself back up to 6th. The Woking team went on to have a very quiet race, and were left scratching their heads after the race.

The Ferrari's on the other hand, seemed to have made significant strides, and Fernando Alonso was able to maintain a lengthy duel with Mark Webber, with the Spaniard eventually gaining the upper hand. Michael Schumacher fell to 17th after loosing his front wing against the car of Vitaly Petrov when exiting the pit-lane. Jamie Alguersuari went the opposite direction, and advanced from 18th to 8th by the race's end. This was Sebastian Vettel's 6th win from 8 starts, confirming his dominance in 2011. 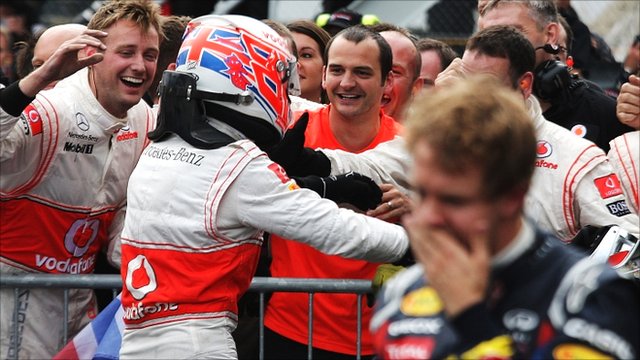 Few fans were left sitting down during the last lap of the 2011 Canadian Grand Prix at Montreal. With 38% of the overall vote, Jenson Button's last lap clinching of victory proved a favourite with these polls. After an incredible four hours from the start Vettel was being hounded by a resurgent Jenson Button who had recovered from a string of incidents to challenge for the lead on the drying track. Half way around the final lap, Vettel drifted offline and his wheel caught a wet patch, sending the reigning champion into a slide. This proved a costly mistake, and Button didn't need to be asked twice.

Very entertaining and informative read, Lew. You may have a future in journalism if the acting doesn't pan out (or maybe a dual career?) but lose the "loose".
A learned blockhead is a greater blockhead than an ignorant one.
Top

smokin wrote:Very entertaining and informative read, Lew. You may have a future in journalism if the acting doesn't pan out (or maybe a dual career?) but lose the "loose".

I think you're saying he should tighten it.

Hey! That sounds good!
"I'm very privileged. I've always had a very good life. But everything that I've gotten out of life was obtained through dedication, and tremendous desire to achieve my goals. A great desire to victory, meaning victory in life, not as a driver"
Top

That is a risk that I am willing for you to take.

That is a risk that I am willing for you to take.

Right then ladies and gentlemen. Another season has gone by, and it's therefore time for this season's famous and much-lauded LewEngBridewell's Forumula1.com Awards. (Rapturous applause).

Here are the topics, and I'll gradually complete a thread for each topic.

Feel free to make suggestions for any other polls below.

Main polls have now been created, I hope you all enjoy voting!

Thanks for the suggestions, I'll look into them. Lots of forum-members awards being suggested!

Forum member awards may not be the best idea. Could get a bit gnarly.